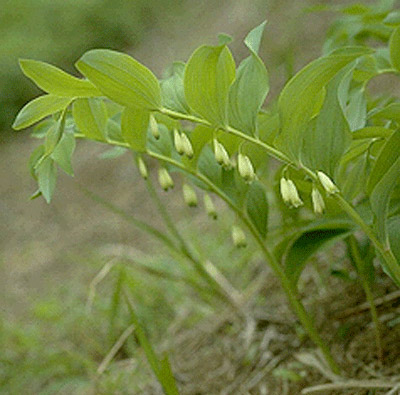 Polygonatum is relatively easy to grow, doing best in rich organic soil with an acid to neutral pH. The plants need some shade and will do well in deep shade. They require adequate moisture as they are becoming established, then are quite drought tolerant. They are hardy in USDA zones 4-8.

Plants can be propagated by seed but are usually started by transplants or rhizomes, and will spread naturally by rhizome. Seeds should be planted in a cold frame in autumn and can take up to 2 years to sprout. It takes several years before a clump is large enough to divide for propagation. Rhizomes can be divided in autumn, or in the spring when growth first begins, though care should be taken to avoid damaging young brittle shoots. For the best success, each division should have several buds.

For medicinal use, the best quality Yu Zhu are long, thick, soft rhizomes that are yellowish white in color and have a sweet taste. Large, fleshy, semi-transparent rhizomes are considered superior.

The herb is most commonly used in its raw, dried form, but it may be processed (zhi yu zhu). In this case, it is put through a process of steaming and cooling, repeated 3 to 4 times, until the herb is evenly black inside and out. This processing increases the ability of the herb to tonify the middle burner, though it slightly increases its cloying nature.

Polygonatum odorata, or Solomon’s seal, is a slow spreading woodland plant that is commonly grown in shade gardens around the world for its pretty arching stems and foliage with tubular white flowers that hang underneath the leaves. The small flowers are followed by round black seedpods. There are many cultivars of this species, including “Variegatum”, a popular variegated form that has green leaves edged with white.

Polygonum odorata is also known by its synonyms Polygonatum anceps, Polygonatum officinale, and Polygonatum vulgare. The plant is native to Europe from Scandanavia south and east to Spain, as well as Siberia, China and the Himalayas.