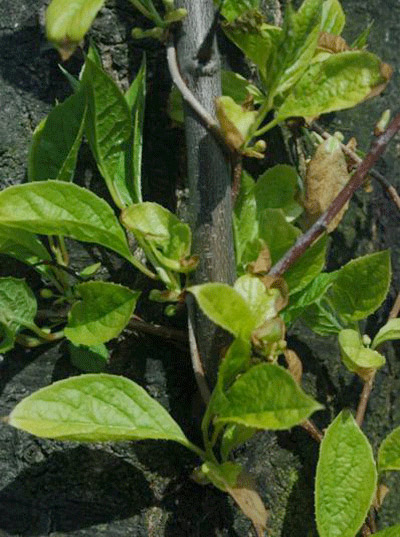 Schizandra chinensis is a perennial climbing vine blooming from April to May with creamy white flowers. As the flowers die they are replaced with clusters of smooth, round, scarlet fruits in September to November. Individual flowers are either male or female but only one sex is found on each plant, so in order for plants to bear fruit, there must be both a male and female plant.

The plant grows best in rich moist soil and a shady environment and will not do well in drought conditions. It prefers slightly acid soil though will tolerate some alkalinity when supplemented by organic matter. The soil should be loose and well cultivated with good drainage.

Plants can be propagated by seed or cuttings. Fresh seed is best sown in a cold frame in the fall right after ripening, or stored seed may be pre-soaked in warm water for 12 hours then planted in a greenhouse in the spring. Germination can be slow and difficult and it is recommended that seedlings be protected in a greenhouse for the first 2 years of growth before planting in a permanent position in the garden.

Cuttings are best taken in March before the leaf buds unfold, but they may also be made in July and August. Branches are cut into 4-5 inch pieces, planted obliquely in rooting medium, and watered well until roots develop in 2-3 weeks. They should be protected over the winter in a greenhouse before planting outside late the following spring.

Fruits are harvested after the frost in late October or early November, and dried in the sun. “Yellow wine schizandra” is prepared by cooking the fruits with rice wine. 20 pounds of rice wine is added to each 100 pounds of fruit. The mixture is placed in a covered double boiler, steamed until the fruits absorb all the wine, and dried. For medicinal use, the dried unprepared fruits should be large, purplish red, with an oily pulp and strong fragrance.

There are 2 species of Schizandra used in Chinese medicine as Wu Wei Zi. One is Schizandra chinensis, pictured above, which is grown primarily in the northern Chinese provinces and sometimes called “northern schizandra” or Bei Wu Wei Zi. The other is Schisandra sphenanthera, sometimes referred to as “southern schizandra” or Nan Wu Wei Zi. This species is also grown in more northern Chinese provinces, but to the south of the region where Schizandra chinensis is grown. Schizandra chinensis is larger, fatter and redder in color, and is considered of far superior quality. There are quite a few other acceptable species for medicinal use, including S. henry, S. propinqua var. chinensis, S. rubiflora, S. neglecta, S. lancifolia, S. micrntha, S. pubescens, S. viridis, S. sphaerandra, S. glaucescens, and S. bicolor.

Wu Wei Zi means “five flavored seed” and though its primary flavor is sour, it gets its name because the skin and flesh of the fruit are both sweet and sour, the kernel is pungent and bitter, and when the kernel is chewed, it leaves a salty aftertaste. When fresh schizandra berries are available they are often decocted alone for a tea with honey. For this traditional tea, two cups of ripe fresh berries are steamed so that the skin breaks off easily. The fruit pits can then be easily removed by rubbing the fruits. The flesh of the fruit is then simmered in water for 20 minutes, adding honey to taste. The decoction is bottled for future use and for each serving of tea, 2 tablespoons of the concentrated decoction is added to hot or cold water to make a refreshing drink.

When using dried schizandra berries, one pound of Wu Wei Zi can be soaked overnight in 2 cups of water. The pits are then removed from the fruit and the flesh is mixed with another 2 cups of water. This mixture is then strained through cheesecloth, honey is added, and the liquid is cooked until concentrated down to about 4 ounces.