The Assessment and Management of Upper Extremity Epicondylitis

Upper extremity epicondylitis is known commonly as a “tennis elbow” when the lateral epicondyle is compromised and referred to as “pitchers elbow” when the medial epicondyle is impaired. These conditions are frequently encountered in the clinic and often are stubborn in their recovery. The manner of approach and efficiency of the acupuncture treatment can determine the success or failure of the outcome.

When an acupuncturist engages the term “balance” in the description of their work, in my opinion we are speaking of structural balance. This is significantly different than the assessment of balance by a practitioner observing the tongue and pulse of a patient. Structural balance is assessed by observation and palpation, and the jingluo construct is the language of instruction and the basis for much of what we do. When merged with a Western anatomical view, the language of diagnostics takes on an articulate beauty, focusing the approach of the acupuncturist and creating a platform of communication with our surrounding medical community for both triage and referral. 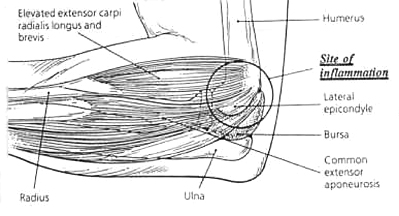 Upper extremity lateral epicondylitis occurs far more commonly than does the impairment of the medial epicondyle. It is diagnosed by a rather focal tenderness over the lateral epicondyle. In the simplest of cases this tenderness does not extend beyond the epicondyle and little swelling will be noted on palpatory exam. In a small percentage of these cases, an extensor tendonitis is also present and can be easily assessed by extending the wrist of the affected extremity. The vast majority of these maladies have a fairly straightforward etiology, being due to either sport or computer-related activity, and generally include a prolonged period of expectant recovery before help is sought.

As practitioners, in all cases we should question the patient in detail regarding their neck and upper back discomfort, both having occurred in the past or present. The lower back may also be relevant to their current situation and lateralizing the low back should be identified and taken into consideration.

The structure always provides an explanation for how and why a particular disorder arises and does not self-resolve. In the case of the upper extremity lateral epicondylitis, the lower cervical spine is often involved. The C6 nerve root has governance over this region and commonly, compressive forces over time have impeded neural firing patterns and therefore weakened the muscles and their attachments. With depleted neural support, these muscles fatigue more easily and attachment issues can easily arise.

The simplest means of assessing the presence of a cervical component in your patient is by performing a palpatory exam of the cervical and upper thoracic spine. When doing so, you most often encounter an ipsilateral muscular guarding in the segments just inferior to the segment of injury and a bilateral muscular restrictive process in the T4 through T6 segments. These are known as “muscular distraction segments”. A distraction segment is a segment of the paraspinal musculature that is hyper-toned. This generally occurs inferior to a cervical abnormality and is the result of the body’s attempt to unload a particularly intense acute or chronically persistent injury of the cervical spine.

It can be said that, in general, the body will always attempt to even tension throughout the entire structure. The cervical compression and distraction segments must be a fundamental part of your treatment plan when addressing this condition. These structural issues are the likely reason for which the lateral epicondylitis commenced to begin with. When there is loss of flexion/extension and rotation in the upper thoracic spine, no matter how small, there is a proprioceptive disorientation of the upper extremity followed by dysfunction of the musculature, leading to the overuse condition.

In acupuncture, needling should be kept to a minimum in all cases. The fewer number of needles used, the more articulate the input they generate and the clearer and cleaner the response. In addressing this particular type of condition, as a rule I would employ no more than 6 needles. For example, I might use one needle in the local/region of complaint depending on the diagnosis arrived at when considering the jingluo distribution, one needle in the distraction segment inferior to the cervical injury, bilateral needles at the most prominent distraction segment of the thoracic spine, and one needle in the contra-lateral gastrosoleus complex.

At the completion of the treatment, assessment is performed by re-palpation of the treatment findings. In this particular condition the barometer of change and the prognostic indicator is in the muscular distraction segments in the upper thoracic spine. The amount of change that occurs will allow you to assess the number of future treatments needed and will act as a guide for your patient in the recovery process.

James Blair, L.Ac. is the clinical director for Seattle Acupuncture Associates. With over 35 years of experience as a practitioner, he has also served as president of AOMA (Acupuncture and Oriental Medicine Alliance) and worked offering didactic and clinical instruction for 15 years.