Some Thoughts on Active Points

The goal of every acupuncturist is to locate and treat the points that are most effective, but there is a great variety of ways in which we go about this. Many approaches, classical and modern, have been advanced for this purpose, but there are many differences and not much consistency among these methods. In Japanese acupuncture, practitioners generally agree that active or effective points can be palpated as some difference at the surface. Even with this general consensus, however, active points are said to manifest in such a variety of ways in various locations that it takes practice and experience to locate them. So we each have to take whatever knowledge and sensitivity we have and gradually develop a feel for locating active points. 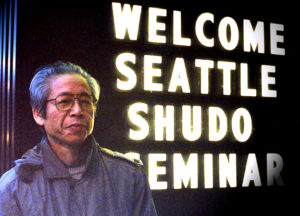 My esteemed teacher, Shudo Denmei, mentioned how his own teacher thoroughly palpated patient’s bodies to find reactive points. Although this approach laid the foundation for his practice, Shudo Denmei was drawn to Meridian Therapy partly by his desire for a more comprehensive system for point selection above and beyond palpating reactive points. I have followed Shudo Denmei’s approach in my acupuncture practice for over 25 years and have applied his point location method ever since I read his series on locating effective points featured about twenty-five years ago in the Japanese Journal of Acupuncture and Moxibustion (Ido-no-Nippon).

I subsequently compiled and translated these articles into his second English text. In this process have developed my own understanding of effective points. While these ideas do not greatly differ from my teacher’s view, they are a product of my own experience and thinking. I would like to present them here for Western readers in hopes that it will assist those who are interested in improving their point palpation and initiate discussion on this very important topic. Granted that palpating points is a very experiential and subjective activity, there are some basic ideas and descriptions that can serve to help us understand and identify effective points.

The concept of acupuncture points in Japan is unique. This is due in part to the history of setting aside the concept of meridians and treating points in their own right. In Japan active points are commonly called tsubo and these active points, rather than being fixed in location, are moveable changeable phenomena. As living phenomena, the active points in our body are in a constant state of flux so naturally their locations differs from person to person.

These active points, or tsubo, are most often regarded as being tight or tender points. Many other “differences” are associated with active points, however. In fact, it seems that these “differences” include a broad range of phenomena from softness to hardness and insensitivity to hypersensitivity. These differences that are palpated as active points can be subtle or quite obvious. Given this broad range, it can be confusing what one is supposed to look for. This is why I find it useful to categorize active points broadly as being either deficient or excess in nature.

Among all the discussion and writing on active points in Japan, I am surprised that many practitioners seem to ignore the deficient points all together. The Meridian Therapy School for one pays considerable attention to the deficient variety. It’s easy to understand why the deficient (soft or depressed) points go unnoticed, but working only on the excess aspect seems like a one-sided strategy. If balance is what we are seeking, it makes sense to address both ends of the spectrum. In any case, most every school traditional as well as modern places importance on treating excess points.

One must not forget, when classifying points as either deficient or excess, that some points seem to fit in both categories and sometimes neither. The factor of tenderness is one that often confuses the issue. Sometimes points are tender without there being any hardness or palpable difference. Conversely, a tight or indurated point is not always tender. And there are many gradations in the quality as well as the intensity of tenderness.

Tradition holds that pain with pressure is a sign of excess, and that pleasurable tenderness is a sign of deficiency. Be that as it may, hypersensitivity to me generally indicates inflammation or circulatory obstruction, which are excess signs. When I look for deficient points, I usually do not press them with enough force to elicit tenderness. The basic principle is to tonify or bring Qi to deficient points; pressing hard and causing pain is not desirable because it disperses the Qi. Although I do want to know where there is hypersensitivity, it is not that important to me whether the patient feels tenderness at a given point. What matters is that there is a clear difference from the surrounding tissue that feels abnormal. This places the prerogative of treatment in the practitioner’s hand, rather than the patient’s sensitivity.

Deficient and excess points can appear anywhere on the body, but there are places that they are more likely to appear. I usually look for deficient points along the Yin meridians I intend to tonify. So they can be found more often in the Yin aspect of the body, but not always. There are often depressed areas on the abdomen, CV-6 to 4 being a prime example. Just as often there are tight or indurated points on the abdomen; as often found between CV-12 to 14. So it makes sense to first palpate very lightly to find the depressions before pressing deeper to look for tightness or indurations.

I usually find excess points along Yang meridians or in the Yang aspect of the body, especially the back. The technique for locating excess points in the Shudo style is to press quickly over a likely area with the ball of the thumb. I am referring to the palmar surface of the distal joint of the thumb, so the base of the thumb may be better than the ball of the thumb. Once the tightest area is confirmed, one can pinpoint the “tip of the iceberg” with a fingertip. There are many kinds of indurations at varying depths, so the finger technique has to be adjusted according to the patient and practitioner.

Palpating the whole body for both soft and hard points will yield more points than one can possibly handle in one treatment. This is where it is valuable to have a system like Meridian Therapy to sort the wheat from the chaff. With a focus on specific meridians, one can balance the body without having to treat everything that comes up on the radar. My belief is that by treating the deficient points first (root treatment) many of the secondary excess points subside to leave the more important excess points. I think that treating deficient points addresses imbalances in the Yin aspect (visceral dysfunctions), and this seems to pave the way for adjusting the musculo-skeletal system by treating excess points.

Almost all practitioners seem to work on the Yang aspect by treating excess points. I like the Shudo style because both the deficient points are treated along with the excess points. The subtle stimulation of contact needling or super-rotation needling (the hallmark technique of Shudo Denmei) is effective for both types of points, but I believe deeper needling is contraindicated for the deficient points. As one comes to recognize different varieties of active points, naturally one develops different strategies to deal with them. If you read Shudo Denmei’s text on effective points with this perspective, the obvious differences among effective points both in palpation and needling should make more sense.

This article was reprinted with permission from the author. It was first published in the North American Journal of Oriental Medicine, No. 34, July 2005.

Many thanks to Stephen Brown for his permission to reprint this article, first published in the North American Journal of Oriental Medicine, No. 34, July 2005.

Stephen Brown was born in Japan where he lived until the age of fourteen. He later returned to Japan and graduated from the Japan Central Acupuncture College in 1983, after which he was licensed as an acupuncturist and shiatsu practitioner. He also attended the advanced international acupuncture training course at the Institute of Chinese Medicine in Beijing, studied with such renowned teachers as Manaka Yoshio and Serizawa Katsusuke. He currently teaches and practices in Seattle, Washington.

Stephen has translated many books on Oriental approaches to health including Japanese Classical Acupuncture: Introduction to Meridian Therapy, Sotai: Health Through Natural Movement, Effective Tsubo Therapy, Qigong for Health, Meridian Exercises and Clinical Acupuncture. He is currently an associate editor of the North American Journal of Oriental Medicine.