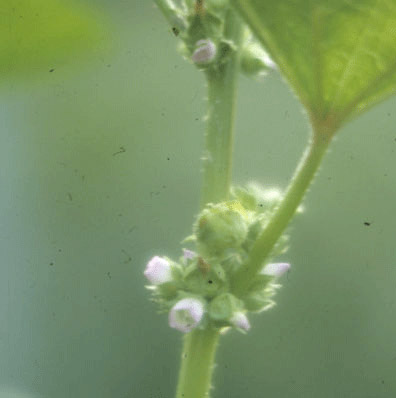 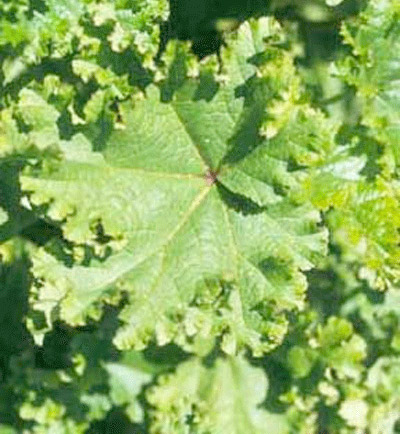 Malva verticilata is native to East Asia, growing naturally on plains and in arable fields. It is widely cultivated as a winter crop, known for its very high nutritional status. Fresh mallow greens, the leaf blades and tender shoots with developing leaves, are all used in stir-fry in Asia, in a similar manner to the use of spinach in the West.

In Europe the plant is frequently grown for its leaves, which are used as a tasty salad vegetable. It should be noted that when the plant is grown in nitrogen rich soil, particularly when it is cultivated inorganically, it tends to concentrate high levels of nitrates in its leaves. Under other conditions, the leaves are perfectly safe and nutritious to eat either raw or cooked. The variety called Malva verticillata “Crispa” is best for this use as it has more tender leaves and curled leaf edges that make it look attractive in salads.

Pictured here in the top photo is main medicinal species, Malva verticilata. The bottom photo is of the variation called “Crispa”.

The plant prefers full sun or light shade and is easily grown in moderately fertile, well-drained soil, though will grow in almost any ordinary garden soil. It will grow up to 2-3 feet high and blooms from July to September with pale pink to near white flowers. The flowers grow in a characteristic clusters of six flowers on short stalks in the leaf axils, in a whorl around the stem.

Propagation is easy by seed sown directly into the garden after the last frost. The plant is not frost resistant and is hardy only to USDA zone 6, therefore is usually grown as an annual, and a biennial in warmer climates.

The fruits are a papery covering containing small seeds that ripen from August to October. In Chinese medicine, the herb is sometimes called Dong Kui Gua, which refers to the fruit cluster of seeds, or Dong Kui Zi, referring to the seed itself. Good quality seed is dry, full and free of foreign matter.

Back to Herb Gallery