There are many traditions associated with Chinese New Year, one of which is to greet friends and family with loud, boisterous sayings and phrases, called ji xiang hua 吉祥话. These are usually good wishes for the New Year, happy sayings and auspicious words that are meant to bring good luck.  One of the most common Mandarin new year phrases is simply xin nian kuai le 新年快乐, or ‘Happy New Year’. To differentiate between the Chinese and Western New Years, people often use the Mandarin phrase guo nian hao, instead of xin nian kuai le. Guo nian hao 过年好, means ‘to pass the new year well’

Another very common Chinese New Year greeting is gong xi fa cai 恭喜发财, which is loosely translated as ‘Congratulations and be prosperous’. It is believed that the first part of this phrase dates back to an ancient Chinese legend where local villagers congratulated one another on beating the mythical beast, Nian. The second part of this phrase, which means ‘prosperous’, is a modern addition.

The Origin and Legend of Chinese New Year 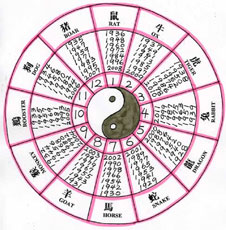 It is widely accepted that the custom of celebrating Chinese New Year dates to the Shang Dynasty (1600 BC- 1100 BC) when Emperor Yao led his subjects to begin worshipping heaven and earth. From that time on, the people celebrated the first day of the first lunar month every year, and it became China’s New Year. It was only after the revolution in 1911 that China adopted the Gregorian calendar and began referring to the New Year as the “Spring Festival”. Both names are used today, but Spring Festival refers to a month-long series of activities that includes decorating, feasts, lantern festivals, shopping, etc.

The legend associated with Chinese New Year involves a terrible, horned beast named Nian who lived in the sea and, each year at the New Year, would rise out of the water and attack animals and people. So, every year at that time, people fled to the mountains to escape the attacks. One such year, Nian came to a small village and the residents ran away to the mountains. However, an old beggar with a stick and a long silvery beard came along and was taken in by a grandmother. The beggar drove Nian away by wearing a red cape and setting off firecrackers, two things that scared the beast the most.

The next day the villagers celebrated and thanked the beggar for driving Nian away and saving them. It is because of this legend that Chinese families set off fireworks on New Year’s Eve each year and wear red clothes on New Year’s Day.

Predictions for the Year of the Yang Metal Tiger 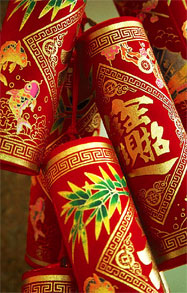 In Chinese astrology, each animal can be converted into five elements. Tiger primarily contains wood, fire and little earth. Wood feeds the fire and makes fire stronger. Metal is afraid of fire and also over controls wood. This means that metal and Tiger together will fight each other, which implies that 2010 won’t come quietly and peacefully.

Chinese astrology sometimes describes the Year of the Tiger as a ‘tumultuous, hard working and vigorous year.  It is traditionally associated with massive changes and social upheaval. Therefore, 2010 may be a volatile one both on the world scene, as well as on a personal level, filled with drama, tension and unpredictability. Events can happen quickly.

But the Tiger has the potential to become vigorous and ferocious, so is a symbol of power, authority, and leadership.  The Tiger also symbolizes courage and it is revered as the sign that wards off the three prime disturbances of a household, which include fire, thieves and ghosts. In the year of the Metal Tiger, it is said that the Tiger brings the element of courage and metal provides the necessary determination and resolve to achieve the goals that are set for the year.

Tigers who thrive on chance and unpredictability are best suited to navigating the many upheavals predicted in the year ahead. Those compatible with the Tiger — the Dragon and the Horse in particular — may also find 2010’s erratic circumstances inspiring them to ever bolder action, and ultimate success.  Those born under other signs may experience varying degree of difficulty, depending on how flexible they are to change. Those who can keep a steady hand on the helm may be shaken, but undeterred by the typically thunderous events foreseen in any Tiger year. 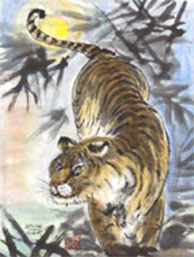 Those born in the Year of the Tiger are described as active, self-assured, optimistic, passionate and independent. They can also be rebellious and unpredictable, quick tempered but considerate; affectionate but careless.  The Tiger is a natural born leader and symbolizes power, passion and daring. They possess a certain magnetism and their natural air of authority confers prestige.  They are respected for their courage, even from those working against them, and perform best if working towards positions of power and influence.

Solitude is often the price Tigers pay for their position of authority, but they become accustomed to it. Better still, they draw on the experience, gaining new energy and great strength. As long as they do not risk their luck too often, and keep their restless nature under control, they will enjoy success and happiness.

Intensely competitive, they simply cannot pass up a challenge.  Tigers often appear cool but are unpredictable, and it would be unwise to underestimate their reactions.  Natural leaders, they have a strong sense of their own dignity.  They are quick learners, intelligent, alert, and farsighted.  Good strategists and tacticians, they often have a hidden agenda and they like being obeyed and not the other way around.

Tigers are generally well liked because of their charming personalities, but must be aware of how they react as they are affected by the consequences of their tempers.  Being hard-working and dynamic, if you assign a task to a Tiger, the job will be undertaken and accomplished with enthusiasm and efficiency.  Often, failing at a given task or being unproductive in their personal or professional life can cause a Tiger to experience a deep depression.  Criticism from loved ones can also generate this type of Tiger reaction.

People born in the Year of the Tiger take pride in being different than others, and generally illustrate their originality best in their homes.  Some tend to change careers more often because they get bored easily.  Although they are selfish in the little things, they are capable of great generosity, even of altruism, in the larger. They like to spend money, and also to share it.  They can be quite impulsive spenders because they know they can always make more.

The Sad Story of the Endangered Tiger 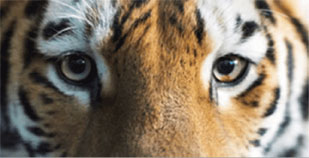 The tiger, largest of all cats, is one of the most charismatic and evocative species on Earth; it is also one of the most threatened. Most tigers live in isolated pockets spread across increasingly fragmented forests stretching from India to southeastern China and from the Russian Far East to Sumatra, Indonesia.  As recently as 80 years ago there were 8 known sub-species of tigers.  However in the 20th century, 3 of the 8 species became extinct, the Bali, Caspian, and Java tigers.

Of the 5 remaining sub-species of tigers, there are fewer than 60 of the South China Tigers, all in captivity, from a gene pool of only 6 tigers, which is not enough to save the species. There has only been one sighting of this tiger in the wild since 1983.  The Siberian tiger is considered “critically” endangered, with an estimated wild population of around 350-450.  They are the largest of the tiger species and can grow up to 13 feet in length and weigh up to 700 lbs.

The primary threats to the survival of the Siberian, or Amur, tiger in the wild are from poaching and habitat loss. Research has demonstrated the Siberian tigers require vast forest landscapes to survive. However logging, both legal and illegal is threatening the tigers home by fragmenting their habitat thereby isolating them from each other.

They are also extensively poached for their fur and body parts.  A single tiger can bring up to $50k on the international market, a tiger’s coat sells for as much as $20,000 on the black market, and there is still great demand all tiger parts – bones, eyes, teeth, brain, penis and whiskers – for use in Chinese medicine.  Though trade in tiger parts is now illegal in many countries including China, it is estimated that in 1991 alone, one-third of the Siberian tiger population was killed to meet the demand for their bones and other parts used in medicine.

Have Efforts to Curb the Trade in Tiger Parts Worked?

Several Asian nations including China, Nepal, Japan, South Korea and Thailand have endorsed tough protections for tigers in the Convention on the International Trade in Endangered Species (CITES). Accordingly, these countries have enacted laws that ban the trade of tiger derivatives, preserve tiger habitat, and form a regional network to halt tiger trade. But lack of government resolve and corruption at the highest levels have thwarted enforcement of these agreements.

The popularity of tiger bones as a remedy for a multitude of ailments has produced a thriving black market, which is very difficult to monitor. Unlike a tiger skin, tiger bones can be crushed and made odorless and can be disguised as other types of bones. Tiger derivatives that are confiscated in raids by government officials are therefore believed to be just the tip of the iceberg.

Despite the acceptance of new trade policies in China, it still remains a principle player in the demise of the tiger and other endangered species. Other countries such as Taiwan have stepped up enforcement efforts since coming under pressure from the United States in 1993-1994.  In Taiwan, a recent trade control law has resulted in raids and seizures, prosecutions, extensive searches of Chinese medicine stores, and customs surveillance.  Hong Kong has also intensified its enforcement activities, following its 1994 trade control laws.

But, such policing efforts in Asian countries touch only a small percentage of Chinese medicine stores. Because the demand for tiger products continues to grow, and poaching is still prominent in India, Russia and southeast Asia, additional measures need to implemented to curb both the supply and the demand for endangered tiger parts.

We wish you a healthy and happy New Year!!