Although not frequently noted in the Chinese materia medica, there are a few herbs containing gluten that may be problematic for patients with food sensitivities, and especially for those with celiac sprue (also called gluten sensitive enteropathy or GSE). People with soy or nut allergies may also be advised to avoid certain herbs. As herbalists, our prescriptions must take into account the degree to which an individual patient seeks to avoid exposure to a certain food.

Gluten is a family of proteins present in wheat and some other grains. Glutelins and prolamins are the 2 primary types of gluten proteins causing the immunologic reaction in celiac sprue that inflames and destroys the inner lining of the small intestine. The particular prolamin protein found in wheat is called gliadin. In idiopathic gluten sensitivity (IGS) it is typical to see the presence of anti-gliadin antibodies.

Proteins, including gliadin, are long chains of up to several hundred amino acids attached to each other. Normally during digestion, enzymes in the small intestine break the proteins into smaller chains and single amino acids. The intestines are only able to absorb single, or at most, chains of 3-4 of these acids.

In celiac, the longer amino acid chains making up gliadin are not completely broken by intestinal enzymes, so that several longer chains remain intact. These long chains enter the cells of the intestinal lining where they attach to an enzyme called tissue transglutaminase. In individuals with celiac disease, the complex of longer chain amino acids and tissue tranglutaminase sets off an immune reaction resulting in inflammation and damage to the intestinal villi.

Because the intestinal villi excrete digestive enzymes and play a major role in the absorption of nutrients, this condition generally results in varying degrees of maldigestion and malabsorbtion. Symptoms can range from fatigue, digestive problems, and nutritional deficiencies, to more severe problems affecting the bones, teeth, skin, nervous system, and heart.

Wheat is by far the largest source of gluten proteins, while smaller but significant amounts are found in rye and barley. In oats, the gluten proteins cause only very weak inflammation. It is estimated that 2% of those diagnosed with celiac disease are reactive to the proteins in pure oat cultivars and they seem to be problematic primarily for those with severe celiac. In general, corn and oats are thought to be safe for most people with gluten intolerance.

The severity of gluten sensitivity varies considerably therefore some can tolerate more gluten exposure than others. There is also variability according to the age the condition is diagnosed and treated. When celiac is diagnosed in a relatively young person, a gluten free or nearly gluten free diet can often result in complete recovery, while if someone has had the disease for decades then begins to reduce their gluten intake, the extent of recovery of the intestinal lining may be limited.

There are other allergies that may involve a different physiologic response than occurs with celiac sprue, including reactions to proteins in fish, shellfish, peanuts, tree nuts, and milk. These food allergies typically do not cause damage to the intestinal villi, but instead cause skin rashes or, in severe cases, anaphylaxis. These reactions are not necessarily dose dependent in the manner that occurs with a toxic response. For those with a severe allergy, symptoms can be triggered by even very small exposures.

Fu Xiao Mai (Floating wheat) or Triticum aestivum, is the dry shriveled wheat grain that floats in water. It comes from a particular variety of wheat plant that is relatively low in gluten compared to the grain used for making wheat bread, but is still concern to people with moderate to severe celiac sprue.

As a medicinal, Fu Xiao Mai is primarily used to nourish the Heart qi and to stop sweating from qi or yin deficiency. Probably the most commonly used formula containing this herb is Gan Mai Da Zao Tang, a famous prescription from the Jin Gui Yao Lue. In the formula, Gan Cao (Licorice), Fu Xiao Mai (Floating wheat), and Da Zao (Chinese date) are used together to nourish and calm the Heart while tonifying the Spleen and Stomach. It is very effective in the treatment of disorientation, anxiety, crying spells and agitation due to dysfunction of the Heart, Spleen and Liver.

Shen Qu, (Massa fermentata), commonly known as “medicated leaven” is a fermented mixture of several Chinese herbs, wheat flour and bran. The fermentation process involves growing yeast on the grain substrate. Wheat is the traditional ingredient, but sprouted barley may be used. In either case, about 38% of the starting material is the grain.

The herbs used in the mixture are not standardized but commonly include those that regulate the qi, transform phlegm and promote digestion such as Xing Ren (Apricot kernal), Qing Hao (Artemesia), Cang Er Cao (Xanthium herb), and Chi Xiao Dou (Aduki bean). Shen Qu is used to harmonize the stomach and reduce food stagnation, especially where there is poor digestion of starches. Bao He Wan is a well-known formula containing Shen Qu and other herbs to treat “stuck food” causing indigestion, abdominal distention, bloating, gas, and diarrhea or constipation. 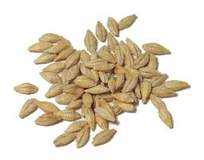 Mai Ya (Sprouted barley or malt) begins with the barley grain Hordeum vulgaris. It is sprouted for about a week until about 6-9 mm long, then is dried in the sun. It is primarily used to reduce food stagnation and promote digestion, especially of starches and milk. It also promotes the movement of Liver qi in abdominal distention and fullness, and when prescribed in quite large dosages it can help reduce lactation in breastfeeding mothers who are weaning their babies. Mai Ya is included in several digestive formulations including Jian Pi Wan and Bao He Wan.

Yi Tang (Barley malt sugar or maltose) is made by cooking barley malt with glutinous rice flour, non-glutinous rice flour, or wheat flour. It is sweet and tonifies deficiency, particularly of the Spleen and Stomach. It also generates fluids and moistens the Lungs in cases of dry non-productive cough. Though not a frequently used herb, it is traditionally found in the formula Xiao Jian Zhong Tang.

Yi Yi Ren (Coix), sometimes called “pearl barley”, is different from the barley grain that contains the gluten-like proteins problematic for those with celiac sprue. Yi Yi Ren is not believed to be allergenic. 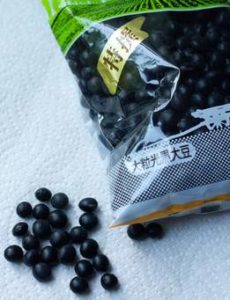 Dan Dou Chi (Prepared soybean) is not a standardized preparation. Depending on the region, decoctions of different herbs are used to steam black soybeans until they are soft.  The mixture of bean and herb dregs is fermented and dried. Herbs used in this process are generally exterior-releasing medicinals such as Qing Hao, Sang Ye, Pei Lan, Zi Su Ye, and Huo Xiang. Dan Dou Chi gently releases the exterior in both hot or cold external disorders, and reduces irritability in cases of residual heat following a febrile disorder. It is an ingredient in Cong Chi Tang and Yin Qiao San.

He Shou Wu (Polygonum multiflorum) is a prepared herb, and the form typically used in clinical practice and referred to in Chinese medical literature is in fact Zhi He Shou Wu (“zhi” indicating “processed”). It is prepared with yellow rice wine and black soybean (Glycine max) juice made by boiling black soybeans for several hours. The herb is steamed with this wine-soybean juice mixture until the liquid is completely absorbed by the Polygonum roots. He Shou Wu is a commonly used herb that nourishes Liver blood and tonifies Kidney essence. It is an ingredient in Qi Bao Mei Ran Dan and Dang Gui Yin Zi, and is often prescribed alone in Shou Wu Pian.

Sheng He Shou Wu is the unprepared Polygonum root. It is not widely used and has a very different function from the prepared version as it is not a tonic herb at all, but moistens the intestines, relieves fire toxin, and cools the blood.

E Jiao (Donkey-hide glue) is processed by washing, soaking and boiling donkey hide in water until it is very thick, then adding rock sugar, yellow rice wine, and soybean or peanut oil, to create the consistency of a thick glue. E Jiao is a very effective medicinal that moistens yin, replenishes essence, and stops bleeding. The amount of soy oil contained in the herb is quite small, and in a formula of multiple herbs, the amount becomes almost insignificant. But for those needing to practice strict avoidance, care should be taken with formulas containing E Jiao such as Jiao Ai Tang, Zhi Gan Cao Tang, Shou Tai Wan, Jiang Ya Pian, and Fu Ke Zhong Zi Wan.

Lu Jiao Jiao (Deer antler glue) is processed by a long series of steps involving soaking, cleaning, and boiling antler, best prepared in the cold weather of the winter season. Yellow rice wine, along with soy or peanut oil, is added near the end of the process. Lu Jiao Jiao nourishes blood and essence and can stop bleeding. The amount of soy oil in the finished product is quite small, but those concerned with strict avoidance of soy should use care with formulas containing Lu Jiao Jiao such as Wu Qi Bai Feng Wan, Zuo Gui Wan, and You Gui Wan 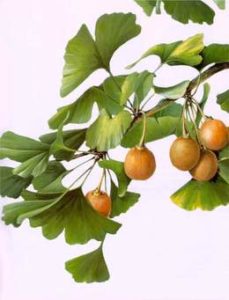 Bai Guo (Ginkgo nut) is toxic as a raw or toasted kernel, but heating greatly reduces the toxicity. When taken as a decoction it is not considered toxic, but allergic reactions have been reported. Bai Guo is astringent and used most commonly in cases of wheezing and cough, and also astringes in problems of excessive vaginal discharge or turbid urine.

He Tao Ren or Hu Tao Ren (Walnut) tonifies the kidneys, warms the Lungs and moistens the intestines to unblock the bowels. It is not a common ingredient in traditional formulas, but may be found in some patent medicines such as Bu Nao Pian and Hai Ma Wan.

Song Zi Ren (Pine nut) is not commonly used in Chinese herbal medicine but can be found in some patent medicine versions of Wu Ren Tang, a formula that moistens and unblocks the bowels. The medicinal attributes of Song Zi Ren are to tonify the qi, dispel wind, and moisten the intestines.

Xing Ren (Apricot kernel) is a fruit pit, not a nut, but believed to be from a species of tree that could potentially trigger a reaction in those with nut allergies. It commonly included in respiratory formulas for cough and wheezing and also serves to moistens the intestines and unblock the bowels. When avoiding Xing Ren, it should be noted that Shen Qu (Massa fermentata) often contains this herb.

Tao Ren (Peach kernel) is a fruit pit, not a nut, but believed to be from a species of tree that could potentially trigger a reaction in those with nut allergies. It is a very commonly used herb, strongly dispersing blood stasis in a wide variety of disorders. Like most nuts and seeds, it also moistens the intestines to unblock the bowels.