Bone Broth for Health Building: Nourishing the Liver and Kidneys

Winter is the ideal time for nourishing the Kidneys, and soup is the perfect winter food. Bone broth is prepared in cultures around the world as both a tasty, healthful soup and an easily digested medicinal food. The prolonged cooking of bones in water results in a broth rich in nutritional constituents that promote strength, tonify blood, nourish in times of sickness and rehabilitation, and help to prevent bone and connective tissue disorders. 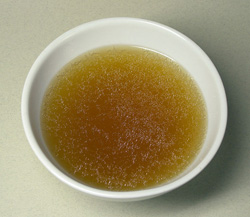 Bone broth is commonly used in the making of high quality restaurant soups, though it is seldom made in the average modern American household. It seemed to fall out of favor as “fast food” became more popular, but as both a flavorful and valuable nutritional food it is well worth making, especially in the winter season.

The broth is easy to make, with the main drawback being that it takes time to cook. Once made, it can be consumed plain as a snack or quick meal, or used as the base for a more complex soup by adding steamed or sautéed vegetables, meat, and/or beans. It may also be used as a base for sauces or added in place of water in the cooking of rice or other grains.

Cartilage is formed primarily from collagen and elastin proteins, but also contains glycosaminoglycans (GAGs), chondroitin sulfate, keratin sulfate, and hyaluronic acid. The cartilage from joints is the kind incorporated into bone broth.

Chondroitin sulfate is a structural component of cartilage and is essential in maintaining the integrity of the extracellular matrix. It also lines the blood vessels, and has been found to play a role in lowering cholesterol and the incidence of heart attacks. It is often sold as a supplement for treating joint pain associated with osteoarthritis and has been shown to improve inflammatory conditions of the gastrointestinal tract.

Studies have found shark cartilage to be useful in the treatment of joint disease and in the stimulation of immune cells, but these supplements can be very expensive. Using cartilage-rich beef knuckles, chicken feet, trachea, and ribs in a bone soup can be an effective and easily absorbable alternative. Cartilage may be useful in the treatment of:

There are 2 types of marrow in bones, yellow and red. At birth, all bone marrow is red, and as we age it gradually converts to the yellow type until only about half of our marrow is red. In cases of severe blood loss, the yellow marrow can change back to red marrow as needed, in order to increase blood cell production.

The yellow marrow is concentrated in the hollow interior of the middle portion of long bones, and is where lipids and fats are stored. The red marrow is found mainly in the flat bones, such as the hip bone, sternum, skull, ribs, vertebrae and scapula, and in the cancellous (“spongy”) material at the proximal ends of the long bones such as the femur and humerus. Red marrow is where the myeloid stem cells and lymphoid stem cells are formed.

Glycine and proline are particularly important amino acids present in bone broth. Glycine is a simple amino acid necessary in the manufacture of other amino acids. It is a vital component in the production of heme, the part of the blood that carries oxygen. It is also involved in glucogenesis (the manufacture of glucose), supports digestion by enhancing gastric acid secretion, and is essential for wound healing. It is a precursor amino acid for glutathione and large amounts are needed for the liver to detoxify after chemical exposure.

Broths can be used in modified fasting and cleansing programs. In these situations, glycine is used for gluconeogenesis and to support phase I and II detoxification. During fasting, because little or no food or energy source is being consumed, protein tissues such as muscle often break down. With broth, glycine is consumed, which limits or prevents degeneration during the fast and is also beneficial to the detoxification process.

Proline is an amino acid essential to the structure of collagen and is therefore necessary for healthy bones, skin, ligaments, tendons and cartilage. It is found in small amounts in many foods, but vitamin C is necessary to metabolize proline into its active form. Small amounts can be manufactured by the body, but evidence shows that adequate dietary protein is necessary to maintain an optimal level of proline in the body. It has also been shown to have a beneficial effect on memory and in the prevention of depression. Glycine and proline needed for:

There are at least 15 types of collagen, making up about 25% of all the protein in the body. It is present in bones, ligaments, tendons and skin (type I collagen), in cartilage (type II collagen), and in bone marrow and lymph (type III collagen, called reticulin fiber). The word collagen comes from the root “kola”, meaning glue.

Basically, collagen is the same as gelatin. Collagen is the word used for its form when found in the body, and gelatin refers to the extracted collagen that is used as food. Bone broth produces a rubbery gelatin when cooled. Most commercial gelatin products are made from animal skin and often contain MSG, but broth made from bones produces a much more nutritious gelatin that contains a wide range of minerals and amino acids.

Poor wound healing, bleeding gums, and bruising are often been attributed to vitamin C deficiency, however the problem is actually a collagen deficiency, as vitamin C is needed to synthesize collagen. Gelatin has also been found to help heal the mucus membranes of the gastrointestinal tract in cases of inflammation such as irritable bowel syndrome or in “leaky gut syndrome”.

Gelatin is rich in the amino acids proline and glycine. Although it is not a complete protein itself, it provides many amino acids and therefore decreases the amount of complete protein needed by the body. Dr. N. R. Gotthoffeer spent 20 years studying gelatin and found that convalescing adults who have lost weight due to surgery, dysentery, cancer and other diseases fare much better if gelatin is added to their diet. Studies on gelatin show that it increases the digestion and utilization of many dietary proteins such as beans, meat, milk and milk products. Collagen is helpful in:

Minerals are essential to life, providing the basis for many important functions in the body. They are necessary for the development of connective tissue and bone, create electrical potential that facilitates nerve conduction, and are catalysts for enzymatic reactions. Many people in the U.S. are deficient in one or more minerals, usually due to dietary deficiencies or poor absorption. Broth offers easily absorbed extracted minerals and supports utilization of the minerals by promoting the health of the intestinal tract.

Bone is an excellent source of calcium and phosphorus, and to a lesser degree, magnesium, sodium, potassium, sulfate and fluoride. Hydrochloric acid, produced by the stomach, helps to break down food but is also necessary to extract elemental minerals from food. For this reason, when making bone broth, an acid is necessary in order to extract the minerals from the bone. This is the purpose of adding a “splash” of vinegar when making broth.

How to Cook Bone Broth

The bones and cartilage of most meats can be used, including poultry, beef, lamb or fish. Pork bones are not generally used for making broth that is cooked for many hours and stored to be re-heated and used later, though they may be included in stew and soup recipes. Quality bones are recommended, such as those from organic meats, and natural, grass-fed beef, with the fat and most of the meat trimmed off.

Chicken carcass is a good choice as it has a high concentration of red marrow. Beef and lamb bones give a nicer broth if they have been roasted in the oven first, until browned (400 degrees F or 200 degrees C for 45-90 minutes). Though bones leftover from cooking other dishes may be used, bones specifically used for making broth may also be bought at most supermarkets.

If possible, use kitchen scissors to break the bones into smaller pieces, ideally 2-3 inches long, increasing the surface area of bone exposed to the boiling water therefore increasing the quality and nutrient value of the soup. For larger bones, your supermarket butcher will usually cut them for you.

Place the bones in a stockpot and just cover with cold water. Add a “splash”, or about 2 tablespoons, of rice, wine, cider, or balsamic vinegar per quart of water or per about 2 pounds of bones. An acid such as vinegar is necessary in order to extract the minerals and nutrients from the bone into the soup. Lemon juice may be substituted for the vinegar. Garlic, onions and ginger may be added for increased flavor, as well as coarsely chopped pieces of celery, carrot, parsley and other vegetables.
Adding Chinese herbs to broth

Chinese herbs such as Huang Qi (Astragalus) and Dang Shen (Codonopsis) may be added to increase the medicinal properties of the broth. These herbs not only enhance the nutritional status of the broth, but are flavorful and add to the sweet taste. Huang Qi and Dang Shen tonify the qi, support digestion, build energy, and strengthen immune function. Gou Qi Zi (Lycii berries) may be added for additional blood tonification.

Cooking and storing the broth

Heat the stock very slowly, gradually bringing to a boil, then turn heat down and simmer for at least 6 hours, removing the scum as it arises. 6 – 48 hours is an ideal cooking time for chicken bones and 12 – 72 hours for beef. If the bones are cut into smaller pieces first, this will reduce the necessary cooking time. Do not allow the broth to come to a fast boil, and if more water is needed to keep the bones covered, add only hot water, not cold or lukewarm.

Cooking in a crockpot on low setting is an easy way to cook broth for a prolonged time. Though it is not necessary to remove the surface scum that arises, doing so occasionally during the cooking process will result in a nicer tasting broth.

After simmering the bones for several hours, other vegetables may be added for the last 1-2 hours of cooking. This adds to both the flavor and nutritional value of the broth. When finished cooking, the bones and vegetables can be removed and discarded, and the liquid strained through a colander. For a clear soup, it should be strained a second time through a hair sieve or a colander lined with cheesecloth. Parboiling and rinsing the bones before cooking and cooking on a low heat can also help produce a clear broth as it greatly reduces the amount of residue in the liquid.

The broth should be set to cool until the fat hardens on top, then remove the fat and refrigerate the broth. It will keep for about 5 days in the refrigerator, or 10 days if it is boiled again in 5 days, and can be kept for months in the freezer. Before re-heating, always remove and discard any residual fat from the top. Properly prepared broth will cool to a rubbery, jellylike consistency due to the high gelatin content of the collagen. It can be re-heated and used as a simple nutritious drink, or for a more complex soup, add steamed or sautéed vegetables, meat, and/or beans.

(Approximately 1-2 hours, depending on amount of bones.) 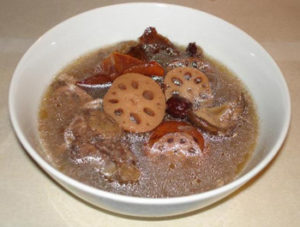