Human beings engage an amazing adventure in life. An individual Shen (Spirit) resides within the jing (essence), which has been consolidated by mixing the jing of both parents. A person is born, experiences the interactions of life, acts to sustain his or her individuality, and records everything that happens. Individuals have the opportunity to deepen their understanding of themselves and the universe through their presence and cultivation until the final crowning of life, when they return to the Dao. 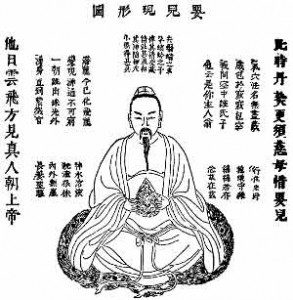 Everyone cultivates something; a few even do it with conscious intention. Our lives are a qigong practice, because we breathe life into every moment. The quality and flow of an individual’s post-natal qi (qi and blood) makes its mark on his or her constitution. People often place habitual demands on their jing-essence, and hence imbue a degree of jing stagnation into their lives. Those stagnations often remain incipient for years, but eventually they will challenge the individual’s ability to maintain life.

Many modern people cultivate some form of food stagnation through intemperate eating habits, which follow common compulsions. These people use food and drink to address their desires, including the desire to be distracted away from unresolved emotional or spiritual struggles, rather than just to satisfy the physiological need for sustenance. This particular means of coping with emotional distress also provides “excess” humors (blood, fluids) into which the embodied spirit can embed its unfinished business.

Habituated lifestyle choices support and nourish each individual’s particular mix of qi and blood stagnations. Many modern people nourish and support “adrenal exhaustion,” which we might label yuan (source) qi depletion, by overtaxing themselves and accumulating stagnations — the wreckage of an overstimulated and frenetic life. That process is sustained and exacerbated when “exhausted” individuals develop dependence on stimulants to activate their qi in the morning.

A healthy person arises and is awake, because wei qi – the post-natal expression of yang (activation) – moves to the exterior with the opening of one’s eyes. When wei qi is entangled in various stagnations, the individual often needs to stimulate it to come out, so he or she can engage the activities of the day. When people don’t sleep well and wake refreshed, perhaps their embodied spirits are telling them something — they don’t really want to go out to do so much! Yet, rather than listening to their own embodied spirits, most people have learned to “man-handle” them to serve their personality’s needs and compulsions.

The habituated interpretations and reactions that each individual cultivates become the context through which all of his or her interactions flow. Attachment to entanglements begets struggle. When individuals experience their interactions through entangled and conflicted interpretations, they form emotional relationships filled with struggle. Generating smooth flow of qi and blood from that experience requires them to either suppress/repress their unresolved struggle, or to devote substantial conscious attention to releasing their blockages and stagnations. While the former may appear functional in the short-term — by displacing entanglements and stagnations into dormancy, that capacity is limited. 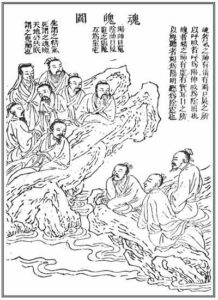 The Neijing (Inner Classic) articulated profound theories to help us clearly differentiate the struggles of individual human life. Individuals typically project habituated interpretations, which are contained in their distinct channels, onto current circumstances and events processed with the primary channels. The unresolved byproducts of everyday life colored by those unconsciously projected interpretations accumulate in either the luo vessels or divergent channels. They may be embedded in various humors (jing, blood, jin-fluids, ye-fluids, phlegm, etc.) at myriad locations, depending on specifics of the individual’s process for suppressing or repressing them.

Individually embodied spirits engage and accumulate experience through the combined agency of the five aspects of Shen (Spirit) – the five shen. Each of these shen is associated with the primal movement of one of the five phases (wuxing), is contained within its zang (vital organ), and expresses interactions with the world through its paired fu (storehouse). Together the five shen provide both the motive force for each individual’s life, and his or her capacity to learn and grow:

Each individual’s life relies on his or her ability to use and contain the light of awareness to fulfill the embodied spirit’s immediate needs. Doing so exercises the individual’s willingness to maintain his or her separate life, which then records all experience. Individuals grow and evolve through life by integrating into both their spirits and bodies the processed results of their experiences and actions. This same process leads to the embodied spirit’s growth of skills and presence, and also the incipient growth of its pathology.

Among the primary channels in the familiar “time-clock” sequence, the liver is last. It accumulates and stores the emotional residue of all experience, which has been processed by the other channels. In somatic terms the liver “stores blood.” Since blood is the mother of qi, stagnations of accumulated blood support qi stagnations. Yet, the gall bladder, acting to support the liver, is also responsible for enforcing the smooth flow of qi. This is done through both:

The classical Chinese worldview identified three hun, which is the aspect of spirit contained in the liver. These represent three modes of being, through which individuals accumulate experience:

The hun of oneness – dis-identifies from the perception of separateness (a particular ideal of Christianity and many other religions.

The hun of duality (or Causation) – identifies with the meaning and significance the individual’s point of view projects onto circumstances, events, people and things.

When an individual’s hun runs rampant, his or her self-talk maintains a superior (or inferior) position relative to all experience. That orientation impedes new inputs from entering, or distorts them to match the individual’s impacted interpretations about life.  Though each person’s “rampaging hun” exhibits a primary orientation – either above or below, each also projects a complementary one to preserve the sense of balance that each soul requires. A few sample pairs include:

These are functional pairs, as they arise directly out of each other. For instance, people who are dominated by rage always feel extremely superior – to the point of not recognizing the legitimacy of other people’s needs and feelings. In their rage they do some terrible and hurtful things. In a calmer moment, they recognize the nature of their acts, and become ashamed. The shame of their violent acts haunts them, and they feel worthless, as shame moves the embodied spirit to the lowest of lows.

Eventually, the individual’s attachment to survival recognizes that it must extract the personality from the pit of its self-imposed hell. Yet, the same force that raises the embodied spirit out of shame becomes rage when it gets stuck on some event or circumstance that challenges the person’s sense of value. This cycle continues until the person recognizes his or her folly.

Likewise, anger or unbridled pride naturally pushes other people away. The embodied spirit expressing them can then experience the sadness of isolation and alienation. Sadness naturally descends, so it brings the angry individual under better control. It may also mire him or her in depression or insecurity. Overtaken by this gloom, the individual rebels against his or her perceived victimization, and asserts his or her being and value. Life becomes a pendulum.

The rampaging hun oscillates between extremes, and is unable to find its calm and secure center. The more wildly one oscillates between the poles of these functional pairs, the more completely the rampaging hun dominates the individual’s personality and experience. Such people are often emotionally volatile and unpredictable, because the internal component of every experience can shift so wildly. This situation expresses somatically as internal wind, which the embodied spirit often tries to control by weighing it down with either dampness or phlegm. Those factors and stagnant blood, which is the somatic version of stagnant emotions, accumulate and eventually block vital function.

The flux of experience in life comes fast and furious, especially because of the individual’s projected entanglements. Each “new experience” combines the events and circumstances that occur (externally), and the individual’s (internal) disposition toward them. That disposition is unconsciously projected onto everything that occurs. There is one enduring question that can benefit nearly every rampaging hun:

Would you rather be right or be happy?

True happiness is far more than feeling well entertained by life. It entails letting go to allow Liver blood to nourish Heart qi. Is being right enough of a payoff to sacrifice one’s vitality toward maintaining the emotional conflicts (somatically, blood stagnation) of the rampaging hun? For most, the answer is apparently a sheepish “yes.”

The rampaging hun mires the individuals in drama, and is blind to the subtle workings of Dao. The hun of Duality separates the individual’s awareness from the complex fabric of influences that support us all, and enrolls in the delusions of its own point of view. The Dao, including its expression within the microcosm of an embodied spirit’s physiology, can only be know by seekers who are willing to notice and release the “monkey mind” to be present in the moment. We are most dangerous when we think we understand. Beware the rampaging hun!