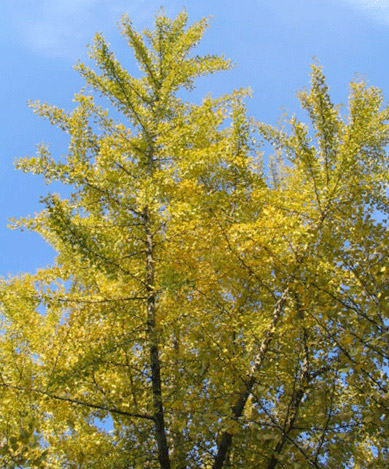 The tree is a slow growing, deciduous broadleaf, gradually reaching 50 to 100 feet high and spreading 30-40 feet. It has distinctive green, fan-shaped leaves that turn yellow in the fall. It does well in partial shade or full sun, with sandy, deep, moist soil, but is very adaptable to wide range of soil types, pH, and even drought. Easy to grow, it is tolerant of air pollution, quite resistant to insects and tree diseases, and even survives fire damage. It is hardy in USDA zones 5 to 9

Propagation is by seed, cuttings, or grafting. Seeds that are planted in fall will germinate the following spring. Cuttings should be taken in June or July and will root in peat and pearlite in 7 to 8 weeks.

For medicinal purposes, fruits should be harvested in fall when they are very ripe. The flesh is removed and seeds are dried in the sun. The clean seeds are then fried or steamed so that the outer shell is easily removed. Care should be taken as seed are toxic when they are eaten in quantity though heating helps to reduce toxicity. When cooked as a decoction for use in Chinese medicine, toxicity is not a problem.

Ginkgo has only one species, Ginkgo biloba. Native to south China, it is now extinct in the wild, but large, old trees are still found growing on temple grounds in China and Japan and it has been cultivated as a specimen tree for many hundred years. There is geological evidence of ginkgo trees dating back 270 million years ago from the Permian to the Jurassic and Cretaceous periods, during the time of dinosaurs. After that time, at the end of the Pliocene period, ginkgo fossils disappeared from fossil records everywhere except for a small area of central China where the modern species of today is thought to have come from.

The lower photo pictured is of a fossilized leaf of Gingko adiantoides, a species of gingko that is extinct but seems to be the precursor to the modern Gingko biloba. The fossil was discovered in British Columbia, Canada, and is from the Eocene epoch of the Cenozoic period.

Ginkgo leaves have received much attention in recent times for their potential use in the prevention of memory decline due to aging. In Chinese medicine, it is the seed rather than the leaves that is traditionally used and the medicinal function is entirely different.

Roasted fresh ginkgo seeds are also a popular delicacy in Chinese cuisine. Fresh, greenish colored kernels are considered best as they are high in protein, and have a good taste when cooked. Within a month after falling from the tree, the color of the seeds change to ivory and they develop a slightly bitter taste.

The roasted seeds are prepared by dry-frying them in a pan over medium heat. They are cooked for 4 to 5 minutes, stirring frequently. When the seeds are hot, their white shells can be easily broken open by applying pressure with a finger. They are considered sufficiently cooked when the center is light green, shiny, smooth and slightly transparent. Roasted ginkgo seeds should be eaten sparingly as eating too many (over 20) can cause some people to develop a rash.