An Exploration into the Workings of Master Dong (Master Tung) Acupoints 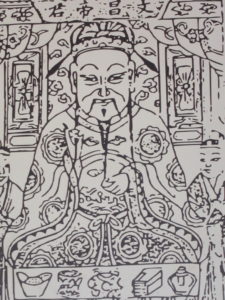 Dong lineage acupuncture is well known for its unusual system of point location, use of few needles and ability to provide quick relief.  Few sources, however, have attempted to explain how these points work so effectively.  Without a precise explanation from direct lineage, many have speculated that Dong acupuncture is without substantial theory or connection to classical practices.  Yet when examining Traditional Chinese Medicine (TCM) fundamental theory, this claim appears unwarranted.  Three selected points varying in location and indication are explored.

Dong acupuncture theory maintains that it is unnecessary to needle along a specific meridian to affect its qi.  Rather, in needling between channels, both meridians join forces in response to local stimulation.  As such, points may be located along one of the twelve regular meridians, along the ren and du channels, or between any of these channels.  The same theory applies to point selection along a channel; needling between acupoints will draw from the action of both surrounding points.

Zhong bai is along the fire channel but has the added benefit of borrowing action from the yuan-source point.  This is to say, zhong bai can both tap into the body’s source qi and navigate source qi’s pathway through the body.  Source qi, or ming men qi, resides between the two kidneys; and so, zhong bai effectively treats disorders of the kidney. White is also the color of metal, the mother of water.

In addition to the typical symptoms of kidney qi deficiency—fatigue, low back pain (worse upon exertion)—are signs of possible kidney yin deficiency: hypertension (which can also be from kidney yang deficiency), dizziness, eye problems (kidney yin not supporting the liver).  Back pain, bone spurs both speak to kidney’s governance of bone.  Sciatic pain may or may not be related to spinal deformity here.

In treating yin-type edema, this point is particularly useful, then, as it can activate the kidney in governing water, kidney yang in warming, and san jiao to facilitate movement through the passages.  Assistance comes from the spleen and jue yin.  San jiao belongs to fire, and its Midday-Midnight oppositional pairing is earth, or spleen.  As fire generates earth, zhong bai is able to tonify the spleen’s transformation and transportation function.  Persistent yin-type edema, however, requires more than just diuresis; it requires blood activation as well .  Hence, jue yin lends a hand in its ability to treat the blood.  Frontal headache may be yet another example of water dysfunction here, with damp or phlegm accumulating in the head.  However, if accompanying symptoms include dizziness and low back pain, headache due to kidney deficiency should be considered first and foremost.

Lastly, treatment of lateral malleolus pain reflects the holographic overlap between hand and foot.  When in the anatomical position, the hand san jiao channel parallels the foot tai yang channel.  In such a position, zhong bai would not be far from BL-63, the xi-cleft of foot tai yang, known best for treating acute pain.

Location:
Above the ankle joint, 3 cun superior to the prominence of the lateral malleolus, 1 cun anterior to the fibula.

The name One Weight suggests this point works to anchor.  This becomes more apparent when we look at the meridians and shu-points that are being affected: GB, ST and fire points.  The GB is the yang aspect of wood, so in the case of heat/fire rising, such as in migraine, we would treat lower distal points on this channel.  The ST to a certain extent controls descending, and needling its channel further facilitates the regulation of qi and blood.

Fire points, particularly when needled at the foot, treat yang channel disease, and serve to drain heat.  This action, combined with a holographic mapping to the throat region, makes this point perfect for treating tonsillitis.  Further, ‘One’ in the name here, could suggest the first of a series and/or treating the ‘yang,’ represented by odd numbers.  Secondly, zhong might be a homonym-variant referring to its neighbor, GB-39 (xuan zhong).

In modern application, proximity of yi zhong to the hui-meeting point of marrow is unmistakable with such indications as encephaloma and meningitis.  The brain is the ‘sea of marrow;’ and the influential point is known as the “origin of the bone marrow.”   In traditional application, this point is more relied upon to smooth the liver and gallbladder qi, to quell any subsequent gallbladder fire rising, to expel wind, dispel wind-damp and to alleviate pain.  These actions are more readily seen in symptoms such as lump glomus and eye/mouth deviation.  The same could be said for goiter, but the explanation requires further elaboration.

A goiter’s impact on the thyroid can lead to three different outcomes: no change (non-toxic goiter), overactivity (toxic goiter) or underactivity (hypothyroid goiter).  It may be due to this point’s draining action then that in both Lee’s translation and in that of Young, ‘thyroid gland swelling’ was translated to mean “hyperthyroidism.” This is strengthened by Master Dong’s clause, goiter “induced by heart disease.”  Thus, we are pointed to common hyperthyroidism symptoms such as palpitations, insomnia, dyspnea and sweating.

Consider the case study of a 58 year-old male diagnosed with thyrotoxicosis.  Symptoms include (but are not limited to) palpitations, insomnia, fatigue, muscle weakness, dyspnea upon exertion, dizziness, hand and leg tremors, anger, thirst for cold drinks, abdominal pain upon eating, nausea, low libido (desire), bowel movement bid (solid, somewhat slow) and weight loss.  He had been experiencing symptoms for roughly six months prior to his first visit, though he was diagnosed only three months prior.  His tongue was dry, normal red, slightly dusky in the back, with a center vertical crack and thin white fur.  Sublingual veins were pale.  His pulse was bowstring in the left cun (weak at the root) and guan positions; thready in the chi. His right side pulse was slippery.  His diagnosis was heart and liver blood deficiency leading to internal wind.

In a case such as this we can utilize the body’s ‘pivots’ to regulate yin/yang balance (excess and deficiency).  This is the role played by the gallbladder and its pairing, the heart.  These two organs also share a midday-midnight pairing, in which wood nourishes fire, appropriate in treating a heart blood deficiency case.  Meanwhile, the stomach aids to hold or ‘contract’ the yang.  In this patient’s case, actions of the neighboring point ST-41 work to boost stomach’s descending function, such as in the case of hunger with inability to eat, dizziness, and agitation.  (Similarly can we see stomach organ involvement as rebellious qi in encephaloma’s symptoms: nausea, vomiting).

Though we often think of the spleen as relating to muscle tissue, it is the earth element that pertains to muscle.  As such, stomach also owns a part of that relationship.  Furthermore, the stomach channel emerges at the eye.  For such reasons, yi zhong, in its borrowing from ST-41, is used to treat enlargement of the eye muscles.  Lastly, let us not forget the wind-expelling action of GB-39, applied here towards tremor.  Other applications of this influence include treating yi zhong indications eye/mouth deviation, seizure and speech difficulties.

Location:
On the auricle, along the lateral edge of the helix, these three points are located at the ear apex, the inferior edge of the midpoint of the lobe and the midpoint between the previous two points.

Needling:
Select by palpation and bleed with a three-edge needle two of the three points.

We can consider this point name from two angles, the literal and the figurative.  Literally, er san is a series of three points on the auricle.  Symbolically, however, this number might be used in reference to the post-heaven luo shu sequence in which ‘three’ represents thunder (zhen), representative of yang-wood.  Thus, we could look to this point to treat wood yang/fire rising, as in migraine.  This is further supported by the needling technique: bloodletting.  These points’ overlapping acupoints directly feed into this action:  Ear Apex is used in treating fever, inflammation, hypertension, revival from hepatic coma, or for sedative effect.  Tonsil #2  and Helix #6 are used to treat tonsillitis and pharyngitis .  Thus, we could use er san to treat common cold with fever and sore throat.

At first glance, it would seem unlikely that er san would treat cholera.  However, consider thunder—the sudden crash before a great rainstorm; it is not unlike the nature of this disease. The trigram for thunder (zhen) is yang (a single, unbroken line) under two yin lines.  Deng Ming-Dao suggests we interpret the yang line’s position as the “hidden impetus” under a driving force .  Though cholera is by nature an external pathogen and therefore yang in underlying nature, its toll on the body manifests through the damage of yin.  This is to say, by draining the body of so much fluid so quickly, a person’s blood pressure drops resulting in arrhythmia or hypovolemic shock.  If untreated, such shock can lead to death within a matter of minutes.  And so, the thunder trigram gives us a visual reminder here of yin and yang’s inter-transformation; as the yang rises, yin is displaced.

Many thanks to Melissa Dana for permission to reprint this article, originally published in the California Journal of Oriental Medicine.

Melissa Dana’s training in Chinese medicine includes a master’s degree from the American College of Traditional Chinese Medicine and internships in the People’s Republic of China at Kunming Municipal Hospital of TCM and Yunnan Provinicial Hospital of TCM. She is a licensed acupuncturist and reiki practitioner in private practice in Seattle, Washington, and consultant at Pharmica Integrative Pharmacy.