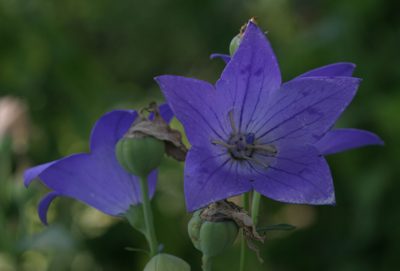 Comments:
Platycodon is a genus with only one species, the grandiflorus. Due to its attractive flowers, it is commonly found in plant nurseries, grown by gardeners and horticulturists as a unique ornamental. In its native habitat, Platycodon grows in grassy fields and on hillside slopes in China, Korea, Japan and some regions of Russia. In Japan and Korea, the plants are also grown for food. Roots, with the bark removed, are pickled or used fresh in soups, while the young leaves can be blanched and eaten in salads.

The plant is easy to grow, cold resistant, and does well in a variety of growing conditions from full sun to part shade. It likes cool moist surroundings and deep, fertile, loamy soil with good drainage. Though hardy, it does not do well if allowed to dry out completely, and will be damaged by very hot sun. If it becomes dried out and damaged by excessive heat the plant will die back and usually stay dormant until the next growing season. Platycodon is hardy in USDA zones 4 to 9.

The plants are often available in commercial nurseries, though are also easily grown from seed started in a greenhouse or sown directly into the garden after the last frost. After flowering, the seed capsules should be cut off and dried completely in order to save the seed for planting the next spring.

Roots may be harvested in the spring or fall, after at least 2 or 3 years of growth. The best quality roots are dense, large and undamaged, harvested in the fall from plants with deep purple flowers. Traditionally, the rough outer bark of the root is scrapped off before drying. In recent practice however, the root is cleaned and sliced without removing the cortex and the ensuing product has been found to retain the same medicinal effects.